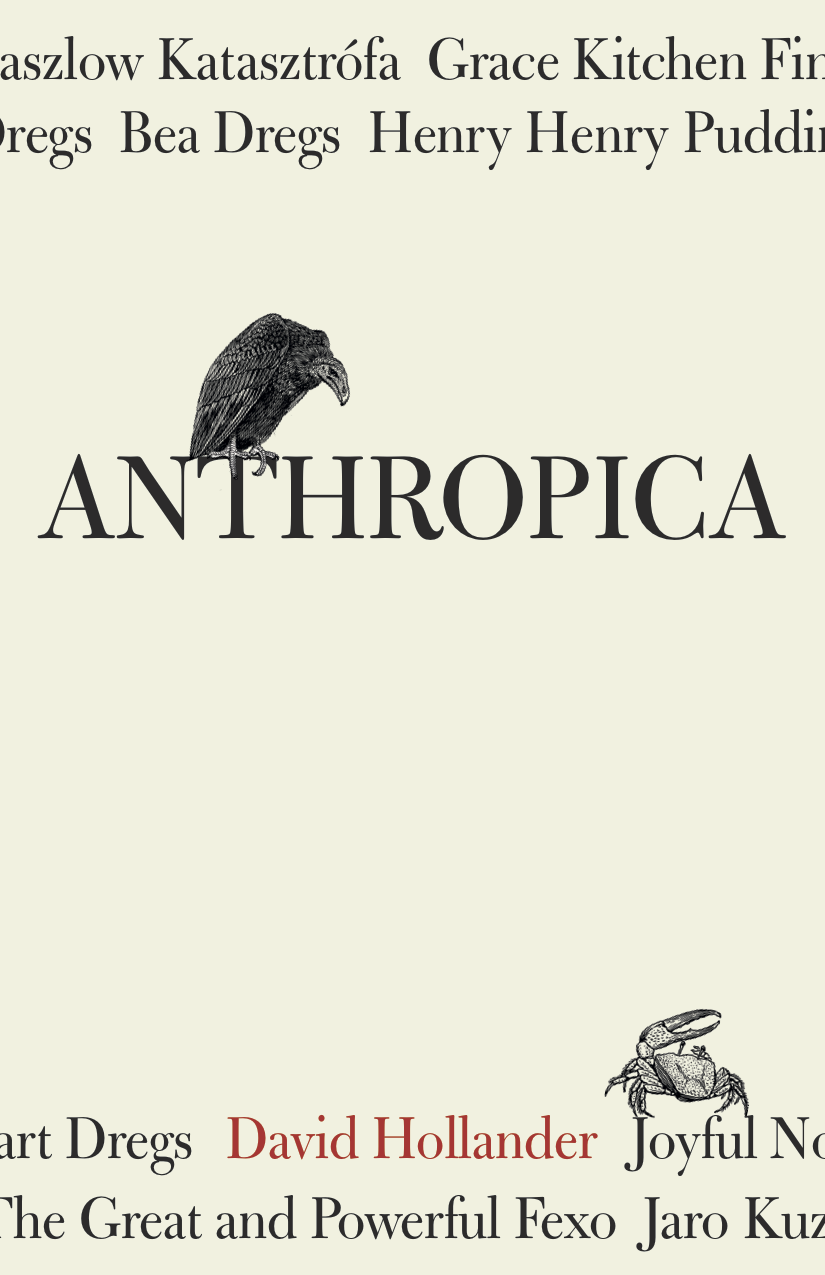 A Hungarian fatalist convinced that the human race is a blemish on God’s otherwise beautiful universe; a statistician who has determined that we completely exhaust the earth’s resources every 30 days; a failing novelist whose nihilistic fiction has doomed her halfhearted quest for tenure; an Ultimate Frisbee-playing man-child who has discovered a fractal pattern contained within all matter, but is nevertheless obsessed with the chase for a National Championship; a banished race of mole people preparing for a violent uprising; a factory filled with human heads being mined for information; a former philosophy professor with ALS who has discovered, as he becomes “locked in,” that he can make things happen simply by wanting them badly enough; and a trio of vengeful, superintelligent robots secretly imprisoned in an underground hangar in Iksan, South Korea, patiently waiting for some gullible human(s) to release them.

This is a partial cast of Anthropica, a novel that puts Laszlow Katasztrófa’s beautiful vision of a universe without us to the test. Because even if Laszlow believes that he is merely an agent of fate, a cog in God’s inscrutable machine, he’s nevertheless the one driving this crazy machine. And once he has his team assembled, it turns out that he might—against all odds and his own expectations—actually have the tools to see his apocalyptic plan to fruition.

“David Hollander’s gorgeous hyperbolic prose voice contains a great many things, for example, a horror about the excesses of the contemporary, and a fearlessness about accepting all of these excesses. Beneath the syntactical dazzle, that is, Hollander sees like a visionary and he feels like an empath. Anthropica is more evidence of his tragic and tragicomic excellence.” — Rick Moody, Author of Hotels of North America and The Ice Storm

“Anthropica is that rare, category-defying book that is pure enchantment: structurally dazzling, philosophically profound, slyly funny, and stealthily moving. This is a book to read and read again, discovering deeper levels every time.” — Dawn Raffel, Author of The Strange Case of Dr. Couney and The Secret Life of Objects

“What a pleasure to watch a writer of David Hollander’s gifts really “lay out” (to employ the ultimate Frisbee parlance of one of his protagonists), to put it all on the line in service to this majestic mysterious artifact, this deeply felt and sometimes madcap Moebius strip of a book. Anthropica is a philosophically vibrant and profoundly funny novel, and a good old-fashioned systems yarn to boot. Space-time, Earth-life, and human (and inhuman) desire and meaning have a worthy bard in David Hollander, and existence gets its dark, beautiful due in this rapturous work.” – Sam Lipsyte, Author of The Ask and Venus Drive

“Anthropica is like the NYTimes crossword on Monday: a little bit difficult but entirely rewarding.  Difficult because it mirrors back the dire state of our world, and rewarding because of the sentence-by-sentence beauty, the crisp creation of characters, the masterful interior voices, the fully-imagined, willing world, the smooth soft underbelly of the story with its sparkling viscera hanging out.  Plus, it’s funny.”   — Jo Ann Beard, Author of The Boys of My Youth and In Zanesville

“David Hollander’s Anthropica is equal parts Goldberg Variations and Rube Goldberg machine—every slotted sentence holds a surprise. It’s a dizzying counterpointer and amplifier and constellatory of voices, a mad music box where his stunning, skilled absurdism laughs as it aches and mostly just sings some of the most beautiful songs.” – David Ryan, Author of Animals in Motion and Malcolm Lowry’s Under the Volcano: Bookmarked.

David Hollander is the author of the novel L.I.E., which was nominated for the NYPL Young Lions Award back at the turn of the century. His work has appeared in McSweeney’s, Conjunctions, Fence, Agni, Unsaid, The New York Times Magazine, and Post Road, among other reputable and disreputable publications. It’s also been adapted for film and frequently anthologized, notably in Best American Fantasy. He lives in the Hudson Valley with his wife and two children and teaches writing at Sarah Lawrence College.

Rick Moody is the author of the award-winning memoir The Black Veil, the novels Hotels of North America, The Four Fingers of Death, The Diviners, Purple America, The Ice Storm, Garden State, and multiple collections of short fiction. Moody is the recipient of a Guggenheim Fellowship, and his work has been anthologized in Best American Stories, Best American Essays, and the Pushcart Prize anthology. He lives in Rhode Island.