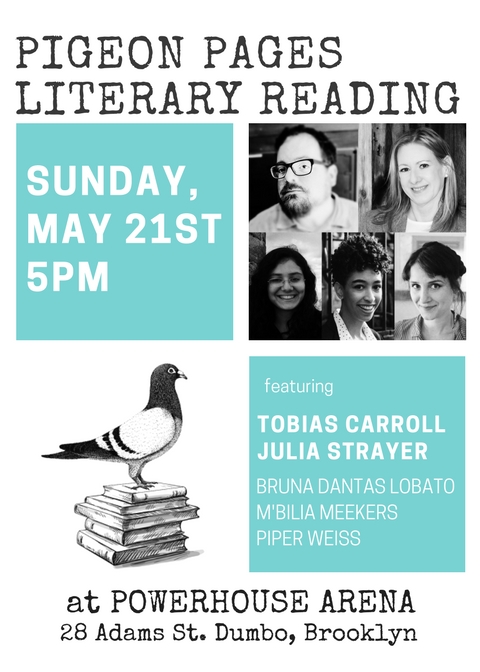 TOBIAS CARROLL is the managing editor of Vol.1 Brooklyn. He is the author of the novel Reel (Rare Bird Books) and the short story collection Transitory (Civil Coping Mechanisms), and his writing has been published by Tin House, Rolling Stone, Hazlitt, Men’s Journal, and elsewhere.

JULIA STRAYER’s writing appears in Glimmer Train, SmokeLong Quarterly, Post Road Magazine, Mid-American Review, South Dakota Review, Fiction Southeast, Wigleaf and others. She placed first in the Glimmer Train Short Story Award for New Writers, was a finalist in the Indiana Review 1/2K Prize and The Best Small Fictions 2017, and has been anthologized in The Best Small Fictions 2015. She teaches creative writing at New York University.

BRUNA DANTAS LOBATO was born and raised in Natal, Brazil. She received her BA in literature from Bennington College and her MFA in Fiction from NYU, where she was the Fiction Editor of Washington Square Review. Her stories, essays, and translations from the Portuguese have previously appeared in BOMB, Ploughshares online, Words Without Borders, The Common, and elsewhere.

With roots in Belgium and Sierra Leone, M’BILIA MEEKERS is a queer poet from New Orleans, Louisiana. She has received fellowships from Cave Canem, The Watering Hole, and Poets & Writers. Her work has previously appeared in the New Yorker, Guernica, Tinderbox, and other print and online publications.

PIPER WEISS is the author of My Mom, Style Icon (Chronicle) and the upcoming memoir, You All Grow Up and Leave Me, out in 2018 (William Morrow/HarperCollins). She served as an editor at New York Daily News and Yahoo, and as the editorial director of HelloGiggles. Her writing has also appeared on Hazlitt, Elle.com and McSweeney’s Internet Tendency.

About your HOST & CURATOR:

ALISSON WOOD‘s essays, stories, and poems have appeared in newspapers and literary journals such as The New York Times, Catapult, Dovetail, Stillwater, and Salad Days Substance. She is the founder & curator of the NYC reading series, Pigeon Pages.