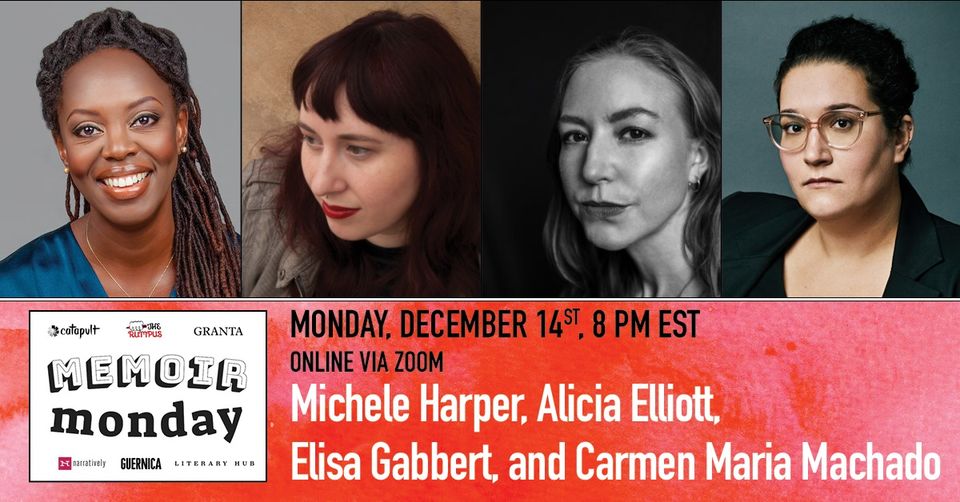 Memoir Monday is a collaboration between Narratively, Catapult, The Rumpus, Granta, Guernica, and Literary Hub to bring the very best first-person writing together in a weekly newsletter and a quarterly reading series.
The reading series usually takes place at Powerhouse Arena in Brooklyn, but will be held online via Zoom until in-person gatherings are safe again!
About our Readers.
MICHELE HARPER has worked as an emergency room physician for more than a decade at various institutions, including as chief resident at Lincoln Hospital in the South Bronx and in the emergency department at the Veterans Affairs Medical Center in Philadelphia. She is a graduate of Harvard University and the Renaissance School of Medicine at Stony Brook University. The Beauty in Breaking, an instant New York Times bestseller, is her first book.
ALICIA ELLIOTT is a Haudenosaunee writer living in Brantford, Ontario. She has written for The Washington Post, Chatelaine, Hazlitt and many others. Her essays have been nominated for National Magazine Awards for three straight years, winning Gold in 2017, and her short fiction was selected for Best American Short Stories 2018, Best Canadian Stories 2018, and Journey Prize Stories 30. She was chosen by Tanya Talaga as the 2018 recipient of the RBC Taylor Emerging Writer Award. Her first book, A Mind Spread Out On The Ground, was a national bestseller in Canada, and nominated for the Hillary Weston Prize for Nonfiction, as well as the First Nations Community READ Indigenous Literature Award. Most recently, it won the 2020 Forest of Reading Evergreen Award.
ELISA GABBERT is the author of five collections of poetry, essays, and criticism, most recently The Unreality of Memory & Other Essays, out now from FSG, which was named a New York Times Editors’ Pick. She writes a regular poetry column for The New York Times, and her work has appeared in Harper’s, The New York Times Magazine, The New York Review of Books, The London Review of Books, A Public Space, The Paris Review Daily, American Poetry Review, New England Review, The Yale Review, The Nation, and many other venues. She lives in Denver.
CARMEN MARIA MACHADO is the author of the bestselling memoir In the Dream House and the award-winning short story collection Her Body and Other Parties. She has been a finalist for the National Book Award and the winner of the Bard Fiction Prize, the Lambda Literary Award for Lesbian Fiction, the Lambda Literary Award for LGBTQ Nonfiction, the Brooklyn Public Library Literature Prize, the Shirley Jackson Award, and the National Book Critics Circle’s John Leonard Prize. Her essays, fiction, and criticism have appeared in the New Yorker, the New York Times, Granta, Vogue, This American Life, Harper’s Bazaar, Tin House, McSweeney’s Quarterly Concern, The Believer, Guernica, Best American Science Fiction & Fantasy, Best American Nonrequired Reading, and elsewhere. She holds an MFA from the Iowa Writers’ Workshop and has been awarded fellowships and residencies from the Guggenheim Foundation, Yaddo, Hedgebrook, and the Millay Colony for the Arts. She lives in Philadelphia and is the Abrams Artist-in-Residence at the University of Pennsylvania.
About your Host.
LILLY DANCYGER is a contributing editor at Catapult and assistant editor at Barrelhouse Books. She’s also the editor of Burn It Down, an anthology of essays on women’s anger; and the author of Negative Space, a memoir forthcoming from SFWP in 2021. Her writing has appeared in Psychology Today, The Rumpus, the Washington Post, Catapult, the Guardian, New York Magazine, and more.