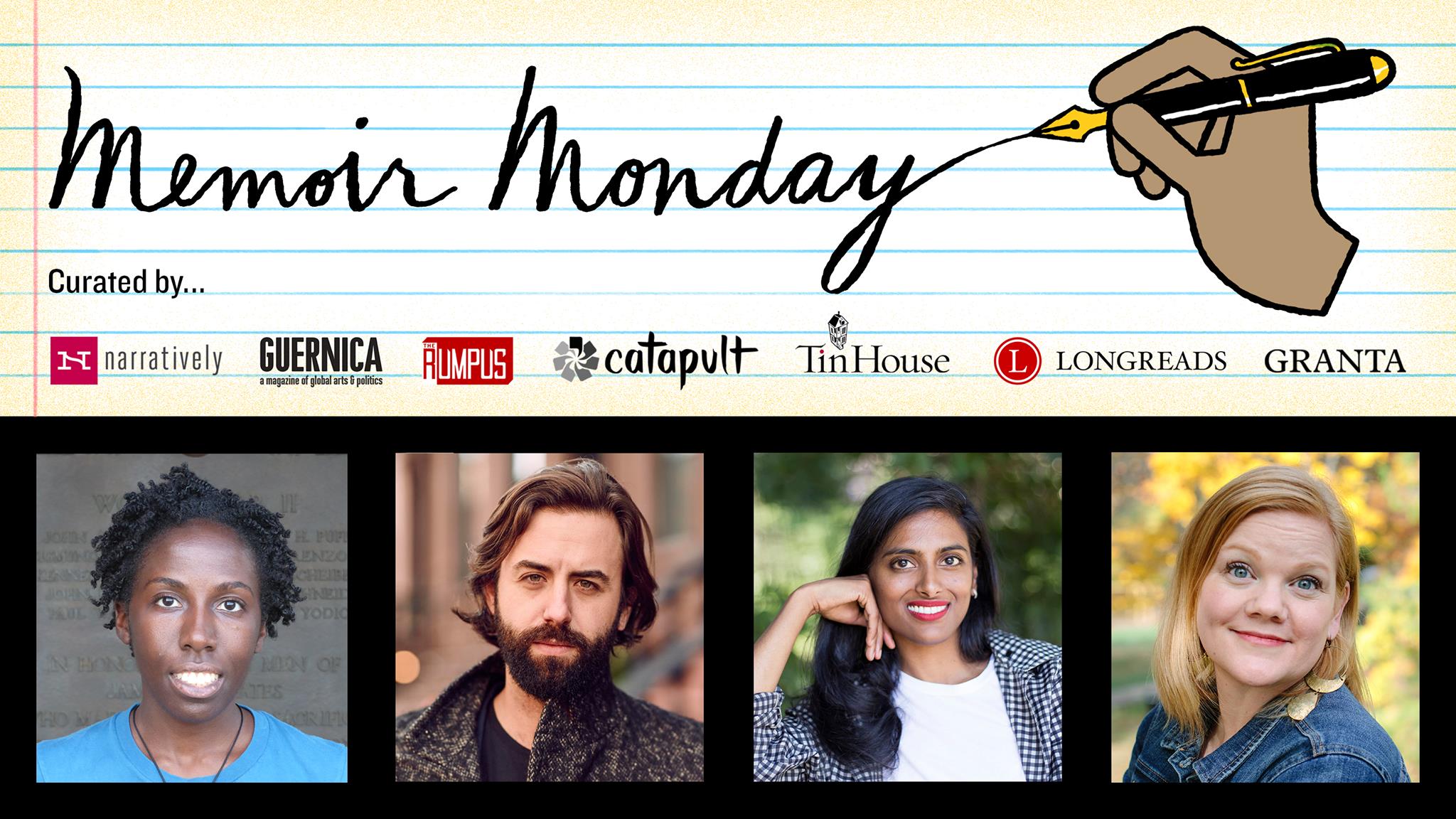 About the Series.
Memoir Monday is a collaboration between Narratively, Catapult, Tin House, The Rumpus, Granta, Guernica, and Longreads to bring the very best first-person writing together all in one place.

We started out as a weekly newsletter, and we’re now expanding to include a monthly reading series!

Learn more about Memoir Monday and sign up for the newsletter here.

JENNIFER BAKER is a publishing professional, creator/host of the Minorities in Publishing podcast, and contributing editor to Electric Literature. She has done social media for Sackett Street Writers’ Workshop, the nonprofit We Need Diverse Books (where she was also a panel organizer), and presently for the I, Too Arts Collective. She has lead writing courses in fiction and nonfiction for Sackett Street, I, Too Arts, and independently. In 2017, she was awarded a NYSCA/NYFA Fellowship & Queens Council on the Arts New Work Grant (as well as their award for Artistic Excellence) for Nonfiction Literature. Jennifer is the editor of the forthcoming short story anthology EVERYDAY PEOPLE: THE COLOR OF LIFE with Atria Books publishing in August. Her writing has appeared in Newtown Literary (for which her short story “The Pursuit of Happiness” was nominated for a 2017 Pushcart Prize), Boston Literary Magazine, Eclectic Flash, The Offing, Poets & Writers, The Other Stories podcast, Kweli Journal, and The Female Complaint anthology from Shade Mountain Press. She has also contributed to Forbes.com, LitHub, The Billfold, School Library Journal, and Bustle, among other online publications.

DANIEL MAGARIEL is an author from Kansas City. His work has appeared in Granta, Lit Hub, Salt Hill, Stop Smiling, and Issue Magazine, among others. ONE OF THE BOYS, his first novel, was a New York Times Book Review Editors’ Choice and Amazon Best Book of 2017, and was published in over a dozen countries. He has a BA from Columbia University, as well as an MFA from Syracuse University, where he was a Cornelia Carhart Fellow. He currently lives in New York with his wife.

MALLIKA RAO is a writer in Brooklyn, focused on questions of self-projection and empathy, how we see ourselves and others, bodily and psychically. Her work can be found at newyorker.com, Vulture, the Village Voice, atlantic.com, The Rumpus, and the New York Times.

KELLY SUNDBERG is a writer, postdoctoral research fellow, and single mother who lives in Appalachian Ohio. Her essays have appeared in Guernica, Slice Magazine, The Rumpus, Gulf Coast, Denver Quarterly, and elsewhere. Her essay “It Will Look Like a Sunset” was selected for inclusion in Best American Essays 2015, and other essays have been listed as notables in the same series. She has been the recipient of grants and fellowships from Vermont Studio Center, Dickinson House, A Room of Her Own Foundation, and the National Endowment for the Arts. Her memoir, GOODBYE, SWEET GIRL: A STORY OF DOMESTIC VIOLENCE AND SURVIVAL was released by HarperCollins in June of 2018.