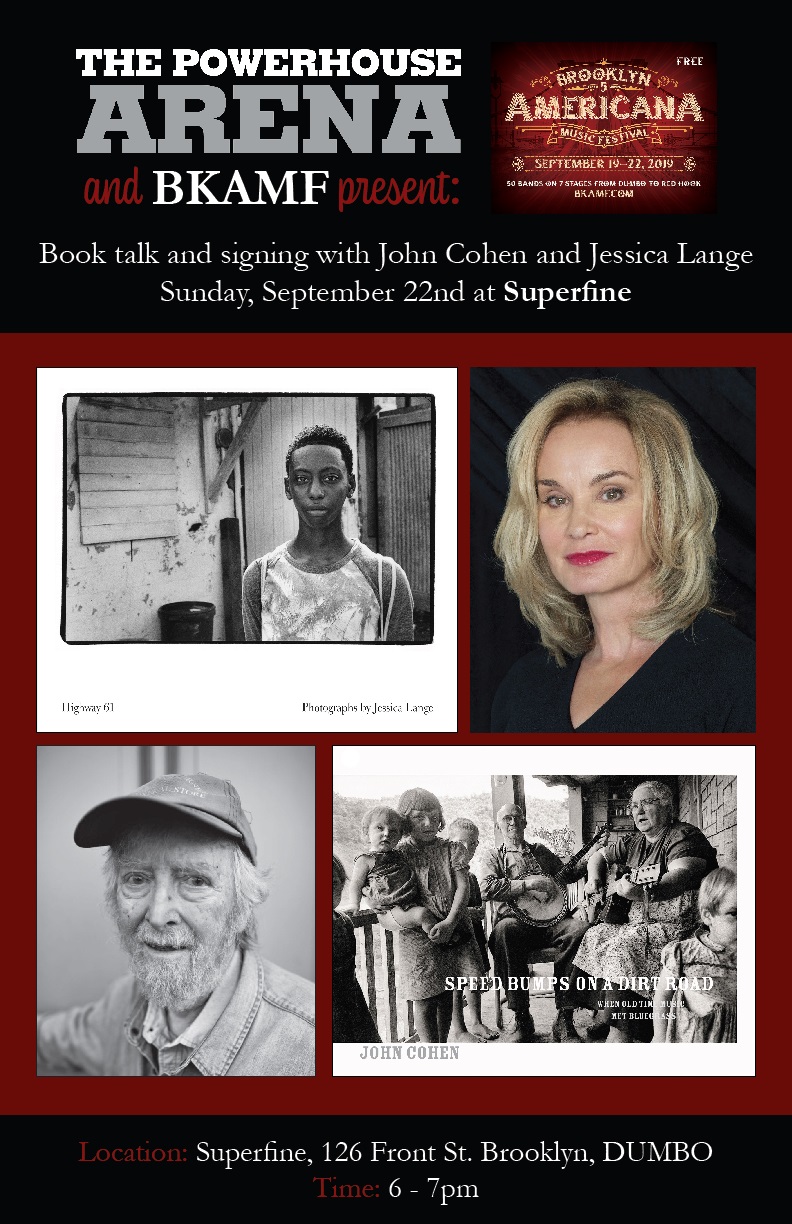 RSVP encouraged & appreciated.
Jessica Lange will be in attendance showing her photographs, and Daniel Power will be showing a slideshow of John Cohen’s work.  Please fill out the form at the bottom of this page if you plan on attending. Facebook event found here.

About Speed Bumps on a Dirt Road.

Speed Bumps on a Dirt Road is a living document of country music’s founding fathers and mothers. John Cohen photographed musicians, at home, backstage at public events, from the wings at fiddlers’ conventions, out in country music parks, and in the studio for live radio show performances and recording sessions.

Back in 1961 it was still possible to know a few of America’s original country musicians from the ’20s and ’30s. Renowned and celebrated musician and artist John Cohen came of age at the confluence of old time and early bluegrass music, the historic intersection of traditional and folk music. Cohen traveled the country playing music, recording, and documenting what was to be a generation of musicians who would influence American music and culture for decades to come.

Traveling between the Union Grove fiddlers’ convention to the Grand Ole Opry to a coal celebration in Hazard, Kentucky, Cohen made historic photographs of performers like Bill Monroe and Doc Watson, the country’s very first all-bluegrass show, and a bluegrass bar in Baltimore, among much more. Speed Bumps on a Dirt Road presents old time music as the root of country music.

Renowned actress and photographer Jessica Lange was raised in Northern Minnesota and has travelled the length of Highway 61 countless times since her childhood and throughout her life. This storied route originates at the Canadian border in Minnesota and runs along the great Mississippi River through the American Midwest and South, rolling through eight states, down to New Orleans.

With more than 80 stunning tritone photographs, Lange’s Highway 61 reveals her deep connection to this iconic route, and presents that which she has long held dear along its way. This is a tale of our shared national heritage as seen by one of the most talented artists of her generation.

John Cohen was born in 1932 in New York City’s Sunnyside, Queens and now lives in Putnam Valley, New York. A 1957 Yale School of Art alumnus, Cohen studied with Josef Albers. Cohen was a founding member of the New Lost City Ramblers with whom he toured and recorded from 1958-2008, making 20 albums, they were nominated for a Grammy Award in 2001. He made nine field recordings of traditional music including Roscoe Holcomb and High Atmosphere and also served as a music consultant for T Bone Burnett’s Cold Mountain.

Cohen’s photographs are in collections of The Metropolitan Museum of Art, the Museum of Modern Art in New York City, the Corcoran Museum and National Gallery in Washington D.C., as well as The Victoria & Albert Museum in London.

The author of many books, Cohen’s photography publications include There Is No Eye and Young Bob, both published by powerHouse Books, as well as Past Present Peru, Cheap Rents, Here & Gone, and Walking In The Light, all published by Steidl.

Cohen is a professor emeritus of photography at SUNY Purchase College and a prolific filmmaker of 17 music documentaries including: The High Lonesome Sound, End of an Old Song, Musical Holdouts, Mountain Music of Peru, and Pericles In America, among others.

The publication of Speed Bumps is scheduled to coincide with Country Music, an eight-part documentary TV series by Ken Burns, which will be screened nationally in September.

Jessica Lange is a photographer and actress. This is her fourth book of photography. She studied photography at the University of Minnesota and is the first recipient of the George Eastman House Honors Award. She has earned two Academy Awards, three Emmys, and a Tony.