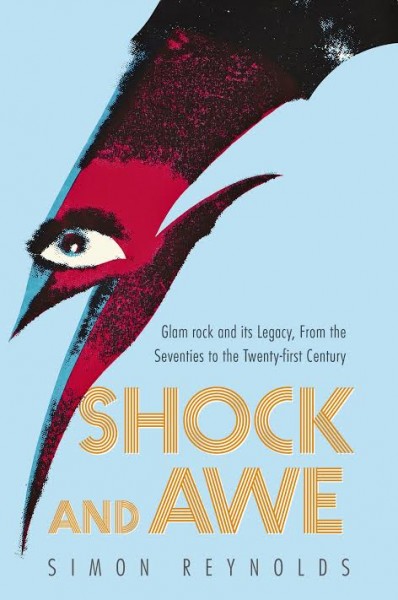 Come celebrate the launch of this in-depth look at the glam and glitter rock phenomenon and its context within the political upheaval and disillusion of the Seventies and beyond.

About Shock and Awe:

Following the musical innovations and cultural upheavals of the 1960s, rock music in the 1970s was in the doldrums: airwaves were dominated by mellow country-rock, earnest singer-songwriters, earth-toned hippie jam bands, and samey-sounding boogie outfits. Then flaring up against the drab denim-clad backdrop, there came glam: the first true teenage rampage of the new decade, a movement spearheaded by artists like David Bowie, Alice Cooper, T. Rex and Roxy Music, that reveled in artifice and spectacle.

For the first time, Shock and Awe offers an introduction to a period packed with amazing music and magnetic characters, but also an accessible and entertaining cultural history situating glam rock in its social and political context. Breaking with the long-haired liberation generation, seventies glam celebrated illusion and artifice over truth and sincerity; it shunned the natural, organic, and wholesome in favor of the constructed and artificial. With intelligent, thoughtful analysis and commentary, Simon Reynolds pursues fresh angles on the central figures of glam—who inspired new heights of stage persona and fandom, even inspiring concert audiences to dress like the star performer—as well as other major artists who caught the theatricality of 70s glimmer.

Shock and Awe focuses on the classic glam rock period, 1971-1975, but also the wider repercussions: the musical leaps, sensation and glamour as social movement, and the personality cult of pop. Exploring the genre’s major themes: fame, androgyny, decadence, science fiction—Simon Reynolds tracks glam’s legacy as it unfolded across subsequent decades, ultimately showing how it prophesied 21st-century pop culture, with its obsessions with celebrity, extreme fashion statements, and theatrical excess.

Simon Reynolds started his journalistic career in 1986 as a staff writer for the British weekly music paper Melody Maker. His writing has appeared in the New York Times, Spin, Village Voice, Rolling Stone, Artforum, The Wire, The Guardian, Slate, Frieze and the Los Angeles Times. He is the author of four books and five collections of essays and interviews. His books have been translated into ten languages. Born in London, a resident of New York for most of the 90s and 2000s, he now lives in Los Angeles with his wife and children.