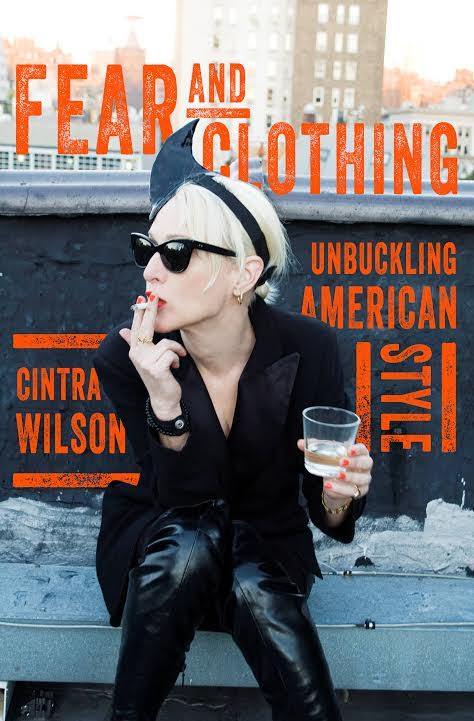 In an age of mass-produced clothing and style dictated by celebrities and bloggers, what does the outfit we choose to wear in the morning say about us? To former New York Times fashion critic Cintra Wilson, fashion determines destiny.

** Cintra is looking for moments of personal fashion transformation from YOU!  During the program, Cintra will project and discuss a handful of fabulous and/or wholly embarrassing photos of images submitted by guests.  If you have a photo of a pivotal time in your own personal fashion, please send them to fearandclothingcintra@gmail.com.

About Fear and Clothing:

“On this hilarious and insightful road trip across the country’s fashion landscape, Cintra Wilson undresses America with eagle-eyed flair, showing who we are and how each of us could be much more awesome.”—Trevor Paglen

In the opening line of her thought-provoking and hilarious new book, Fear and Clothing: Unbuckling American Style, Wilson proclaims that “style can either liberate you, or it can enslave you.” Fashion can change your mood, how others perceive you, even influence your decisions. What you choose to wear each day shapes your life, even while your wardrobe is shaped by the culture around you.

In Fear and Clothing, Wilson takes us on a whirlwind tour into the closets, thrift stores, and designer boutiques across America, to discover who wears what where—and why. From street wear to formal wear, political protest chic to the fashion politics of the Sundance Film Festival, Wilson examines the diverse cultures of America through the revealing lens of their preferred apparel. Armed with her signature wit and an adventurous spirit, Wilson’s magnum opus of fashion critique is also an incisive social commentary that raises compelling questions about who we are as a society and as a country.

Raised on a houseboat in San Francisco, Wilson grew up in a colorful and whimsical world of bell-bottoms and disco sequins, influenced by the Bay Area’s drag queens and aging hippie population. She soon graduated into the bizarre safety-pin creations of the burgeoning punk scene, and her wardrobe has remained all black ever since. From California subculture queen to reviewing the outrageously expensive, over-the-top, and barely functional styles of the New York fashion elite, in Fear and Clothing Wilson finally goes beyond the city limits and into the heartland of America to find how Middle Americans dress.

On her journey, she inhabits the disparate worlds of DC politicians (whose penchant for conservative and intimidatingly impeccable Ivy League apparel is driven by a desire for power, fame, and money) and Middle Americans shopping in Cabela’s, an enormous outdoors store with guns and gadgets for hunting and fishing (whose preference is for camo anything and Tea Party slogan shirts). Region to region, city to city, Wilson witnesses the pastels and virginal bride-inspired styles of Utah, admires the sky-high stilettos and even higher hemlines of the hallucinogenic dream world of Miami, and warms up to the furs, leathers, and denims of frigid Wyoming and the farmlands of Iowa. Wilson has a knack for finding herself in humorous encounters where, in her urban, all-black, New Yorker ensemble, she’s the outsider. She charms a champagne-drenched Middle Eastern millionaire among a sea of gargantuan hats at the Kentucky Derby and is entranced by the unbelievably expansive countryside when she visits the Iowa State Fair, famous among locals for its impressive figure of a cow made entirely out of butter.

In her typical riotous fashion, Wilson seeks out both the odd and the ordinary, with an analytical eye toward the psychological underpinnings of our most seemingly simple fashion choices, asking what motivates the fashion industry to design what they do and what motivates each of us to buy it? Fashion, Wilson demonstrates, is how we express ourselves, it’s “the collision point between our fantasies of who we are, the larger realities we live with, and the way we are perceived by others,” inextricably tied to the current zeitgeist, our values as a culture, our collective dreams and desires, as well as our anxieties and fears. While Iowans living close to the land scoff at the paper-thin tees on sale for $100 at the designer boutiques of money-obsessed New York, Los Angeles, the fantasyland of movie stars and music moguls, favors waxy Barbie-doll limbs and sexy nightlife attire to the virginal modesty that predicts style in Salt Lake City.

Wilson unveils the outrageous price tags and laughably impractical trends of New York’s elite designers and sharply critiques the homelessness chic running rampant among the privileged faux-avant-garde of Brooklyn. She raises important questions about how the fashion industry co-opts, appropriates, or delegitimizes social movements and groups of people in order to maintain the status quo, and she challenges us to think about what our wardrobe means in a larger cultural context. Is it gauche to be wearing purposely distressed tees and ripped jeans when those begging for money on the sidewalk cannot afford the new, shiny-looking clothing that the wealthy are now eschewing? Wilson dissects the changing face of American fashion, from the erasure of subcultures to the taming of political revolutionaries and social deviants. By selling bondage lingerie, studded leather jackets, or feather headdresses for $20 at J. C. Penney or $600 off Madison Avenue, the fashion elite silences dissidents, turning their tools of political expression mainstream. Fashion as well as art, Wilson laments, has become too confused and commodified to ask any pressing questions or subvert the paradigm, removing the danger, the whiff of revolution, that fashion once possessed.

Part fashion investigation, part hilarious commentary, part hard-hitting satire, Fear and Clothing reminds us of the many outside forces that play a part in the way we dress and how difficult it is to truly be yourself. Wilson leaves us with her own personal style mantra: be fearless—“Your fate hangs in your closet. Dress wisely!”

About the Author, Moderator, and Special Guests:

Cintra Wilson is a playwright, novelist, and a past columnist for the San Francisco Examiner, Salon, and the New York Times. She lives in New York City.

Alex Roy is first person in 23 years to break the 1983 cross-country driving record – going from NY to LA in 31 hours and 4 minutes. Roy is also author of “The Driver” and Executive Producer of “32 Hours, 7 Minutes.”  Roy is currently President of Geotegic, and Europe By Car. He is also a columnist for Jalopnik and occasional host of /DRIVE.

Amy Bailey has had starring roles in the TV series “Alive”, and SyFy Network’s “Legend of Cain”. She also collaborates with several fashion labels, including a film for Italian Vogue on designer Marios Schwab, for his 2012 collection.

Jon Caramanica is a pop music critic for the New York Times, and also writes the men’s Critical Shopper column.